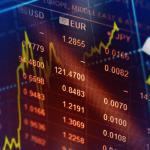 Although average account balances have decreased, the data suggested retirement savers continued to focus on the long-term: total 401(k) savings rates held strong, the number of IRAs at Fidelity continued to increase, and the percentage of employees with 401(k) loans remained low for a sixth consecutive quarter, the firm found.

“The market has taken some dramatic turns this year, including the best month this past October since 1976,” said Kevin Barry, president of workplace investing at Fidelity Investments. “Retirement savers have wisely chosen to avoid the drama and continue making smart choices for the long-term. This is important, because one of the most essential aspects of a sound retirement savings strategy is contributing enough consistently—in up markets, down markets and sideways markets — to help reach your goals.”

Read: Why you shouldn’t ‘set and forget’ your retirement accounts

Total 401(k) savings rates were stable. The total savings rate for the third quarter, which reflects a combination of employer and employee 401(k) contributions, remained fairly steady at 13.8%, compared with 13.9% in the second quarter and 14.0% in the first quarter of the year. That was slightly below Fidelity’s suggested savings rate of 15%.

“Generally, retirement savings rates was not an initial option for people when they wanted to make changes in their financial picture. We also didn’t see people tapping into loans,” said Mike Shamrell, Fidelity’s vice president of thought leadership. “A lot of people are realizing that retirement savings is a marathon, not a sprint. And over the long haul, you will encounter a lot of market scenarios. Staying the course and taking a long perspective is really the strongest path.”

The majority of retirement savers still aren’t making changes to their asset allocation. Only 4.5% of 401(k) and 403(b) savers made a change to the asset allocation in the third quarter, less than the 5.0% that did so in second quarter and those who made a change in third quarter a year ago (4.8%). Of the savers that made changes in Q3, about 85% only made one, with the top change involving shifting savings to more conservative investments (29%).

“Gen Z is really seeing the positive benefits of auto services like auto-enrollment in company plans,” said Shamrell. “Retirement is many years away, but they seem to be the group staying the course, which is probably the best approach they can take.”

The number of IRA accounts continues to increase, especially among Gen Z and millennials.

The total number of Fidelity IRA accounts continues to climb, reaching 13.2 million, an 11.2% increase over Q3 of last year. The number of accounts reporting a contribution also increased by 2.3% year-to-date between the third quarter last year and this year.

Across generations, Roth accounts tend to be the retail retirement savings vehicle of choice, with 61% of all contributions going to a Roth in third quarter of 2022.

Younger generations continue to lead the way, with the number of accounts for Gen Z increasing by 83% compared with third quarter last year and the number of millennial accounts increasing by 25%. In particular, millennial Roth IRA accounts with a contribution increased by 5.8% year-to-date. In addition, younger generations (Gen Z and millennials) now make up make up roughly half (45%) of the tax-exempt workforce, Fidelity said.

Fidelity said its third-quarter analysis of savings behaviors and account balances included data from more than 35 million IRA, 401(k), and 403(b) retirement accounts.