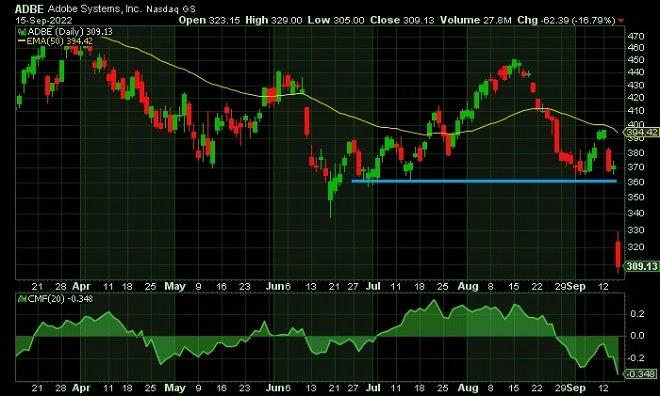 Adobe Systems Inc. (Nasdaq: ADBE) reported mixed fiscal 2022 third-quarter results. While earnings surpassed expectations, revenues met Wall Street forecasts. However, the company issued a weaker than anticipated Q4 revenue outlook. In the meanwhile, the software giant confirmed that it is acquiring design platform provider Figma in a cash and stock deal worth $20 billion. The stock of Adobe closed Thursday’s trading at $309.13, down $62.39 or 16.79% from its prior close.

The San Jose, California-based company reported third-quarter revenues of $4.43 billion, an increase of 12.4% from $3.94 billion in a similar quarter last year.

Analysts surveyed by Refinitiv had anticipated Adobe to report adjusted earnings of $3.33 per share on revenues of $4.43 billion.

Commenting on the quarterly results, Shantanu Narayen, chairman and CEO, of Adobe, said, “Fueled by our groundbreaking technology, track record of creating and leading categories and consistent execution, Adobe delivered another record quarter.”

In a separate announcement, the company revealed that it had inked an agreement to buy out collaborative design platform provider Figma for roughly $20 billion in stock and cash. The company acknowledged that it will have to arrange external financing for the acquisition, which is expected to close in 2023, subject to receiving relevant regulatory approvals.

Adobe also disclosed that under the takeover deal, Figma’s CEO and staff would be offered 6 million shares, which cannot be sold for four years from the time of deal closure.

Following the completion of the aforesaid deal, Dylan Field, co-founder and CEO of Figma, will continue to manage the company as usual. In addition, Field will report to David Wadhwani, President of Adobe’s digital media division.

Figma, established a decade ago, offers cloud-based design solutions. Notably, the software facilitates real-time collaboration between various teams. In certain areas, the firm competes with Adobe’s products (the XD program, for instance). Figma, which commands gross margins of 90%, claims to have 4 million users.

Interestingly, Figma was assessed to be worth $10 billion in June 2021, when it successfully received $200 million in funding. Adobe has pointed out that Figma’s addressable market will be $16.50 billion in three years.

Following the acquisition, Adobe intends to incorporate some of Figma’s solutions (video and photography-related features) in its products.

The mixed quarterly results, lower-than-anticipated Q4 revenue outlook, and Figma acquisition news are expected to keep the stock of Adobe range-bound with a slight bearish bias in the short term.

Technically, the stock has formed a negative gap in the price chart. This indicates that bears have the upper hand. Additionally, the stock is trading below its 50-day moving average while the Chaikin money flow indicator is showing a negative reading. Therefore, we anticipate the stock to remain in a downtrend in the days ahead.

Disclaimer: Any financial trading analysis offered here is our opinion and is not intended as advice or direction for investors. We cannot guarantee the success of any trades made as a consequence of this article, and we encourage traders to incorporate a strong money management strategy to limit losses when they enter the markets. Please use this article as part of your own research before formulating strategies prior to trading.